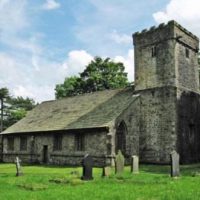 St. Michael’s was once the private chapel of the Tempest family and dates from 1100. Records refer to a priest of Bracewell in 1135, and at Fountains Abbey, records refer to a chapel at Bracewell before 1147.
The south doorway within the porch is Norman with shaped-edged mouldings and capitals but no shafts. The pointed tower arch is 14th Century, and the tower is now a Remembrance Chapel.
The Stained glass Memorial Window installed in 1967, was designed by Pierre Fourmaintraux and supplied bv Whitefriars Stained Glass Studios of Wealdstone, Middlesex. Only small fragments of original 14th Century stained glass depicting the coat of arms of families connected with Bracewell remain. The window in the south wall of the chancel and those in the north aisle contain these fragments.
In the piers of the north aisle are two canopied niches which in Craven, only appear in Tempest churches (Broughton, Kirby Malham and Bracewell).
The round-topped chancel arch is Norman, and was stripped of its plaster covering some years ago to reveal scalloped capitals, typical of Norman decoration. The Norman font is thought to be the original. The pulpit and altar rails are of the Jacobean period.
The pews in the nave are from the workshop of Robert Thompson at Kilburn – the “Mouseman”. The ‘mouse’ trademark can be found on some of the pews. The altar kneelers are based on the words of the Benedicite and the background shapes follow the design of the Norman pillars.
The east window in the sanctuary dated 1864, is Victorian painted glass and represents Christ blessing little children
The Font To the right of the chancel arch with its scalloped capitals, is the font. Bracewell’s font cover is similar to the one which used to be in Ghyll Church until it was destroyed by woodworm.
The Jacobean Pulpit Across from the font the visitor will see the Jacobean Pulpit showing the same decoration as Ghyll’s. Alongside the pulpit is one of the prayer niches which are distinctive to the ‘Tempest’ Churches here at Bracewell and also at Broughton and Kirby Malham.
We are very proud of our three church buildings. Their real value lies in their role as homes to worshipping congregations in the present day.
Why not join us at our regular services.