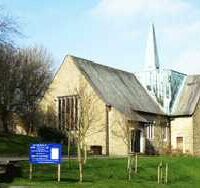 As there was no Established Church within easy access for the townspeople, it was the fervent wish of the Reverend Richard Milner that there should be one. He was the curate from 1836 to1840 and Vicar until 1870. There already were two small schools in the town, one C of E and one Baptist, each in private houses, but inadequate as the population had risen to 3000. There was a Sunday School at Ghyll, but Ghyll Lane was in very bad condition, and this furthered the Revd Milner’s purpose. Mr Royd of Rochdale generously gave the site in the centre of the town for a new school-cum-Sunday School. This was built in the style of a church and opened in 1838. After use as a school for a few years, Milner achieved his aim and in 1842 the Lord Bishop of Ripon consecrated the school as St James’ Church.
Meanwhile the Reverend Milner’s dream for St James’ Church was not to last. It was never consecrated for marriages, was in a cramped if central position, and there were problems with the structure. It was decided to build a new church on the site acquired a short distance away. St James was pulled down and a small supermarket erected on the site. The new church, Holy Trinity, was built and consecrated in 1960 by Dr Donald Coggan, Bishop of Bradford. Formerly the Church had a tower, but continuing problems with it meant that eventually a small spire replaced it.
Holy Trinity was a very imposing building when the tower was in situ. Viewed from the hills behind Barnoldswick its prominent position proclaimed that God was indeed present in this community.
Built after the style of the church on Iona, the interior features of the church include some interesting mosaics on the front of the altar and around the font. 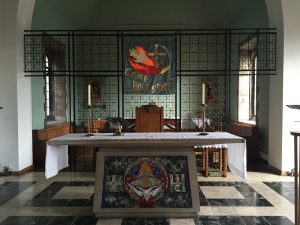 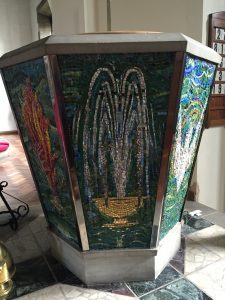 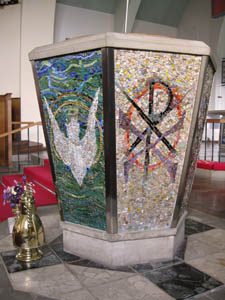