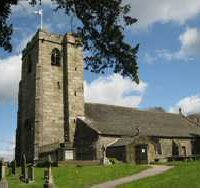 Not much remains of the original structure.  Perhaps a triplet window could be original, and an early English window on the North side.   The font probably dates from that period, as does an old stone coffin alongside the porch. The arms of Kirkstall (three daggers) can be seen faintly etched on an inside wall.

The 14th century was a period of intense Church building, and at this time, the roof, formerly thatched, was probably lowered and stone-slated, as thatched roofs were usually steeply pitched. The south aisle was added at this time.

The massive tower was built in the reign of Henry VIII and dated 1524 in Roman numerals, although the M for thousand has been omitted, it seems intentionally.

It is interesting that in 1743 it is recorded that one service was held only on alternate Sundays, with Holy Communion celebrated four times a year.

The Three Decker Pulpit (dating from 1723 and decorated by William Drake of Coates Hall) and old oak bow pews are Jacobean as is the Altar table. There are also a few Victorian pine pews, easily identifiable.

The Interior walls of the Church have, at some time, been plastered and whitened, probably after the Reformation, when it was obligatory to remove traces of Roman Catholicism.  Hence many interesting old features have either been removed or covered up. 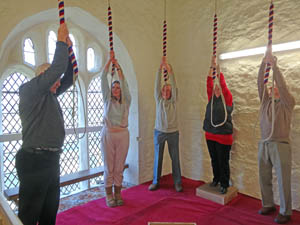 Select the image for information about the bells.